Welcome to another installment of EBFA’s Blog Series: Foot Function and Fascial Lines. This series of articles explores the fascial integration between the foot and the rest of the body.   We will show you that these fascial integrations are more complex that you think and expand beyond simple slings and lines.

This week’s article is dedicated to fascial integration with the sesamoid bones of the great toe joint – and how this influences our ability to engage foot intrinsics, build a strong foot foundation and stabilize the pelvis proximally during gait.

Situated directly under the head of the first metatarsal you will find two small, oval bones.   These two bones are referred to as sesamoids and actually lie within the tendons of the flexor hallucis brevis (FHB) muscle.

Acting much like the patella, the sesamoids functionally create a fulcrum to provide a mechanical advantage to the FHB during the propulsive phase of gait.   As we shift from Late Midstance to Terminal Stance, the FHB engages to stabilize the great toe (and 1st MPJ) against the ground allowing us to push-off in the sagittal plane.

Of course we need to take this one step further as 1st MPJ stability is not only observed in the sagittal plane but also the transverse (and frontal) plane.   To stabilize the great toe in the transverse plane we have to look even closer at the tendons of the FHB.

Enter the Abductor and Adductor Hallucis

Situated on the medial aspect of the FHB we find the abductor hallucis muscle (think short foot!) whose tendon actually joins that of the FHB (medial tendon) forming a conjoined tendon (or one tendon).

Are you ready to review a complex fascial integration in the foot? 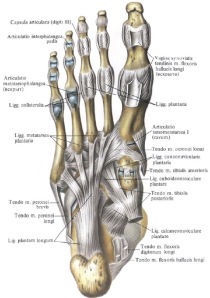 1.  The adductor hallucis originates on the peroneus longus tendon (which is part of the lateral line and spiral line) and joins the FHB as a conjoined tendon.

2.  The FHB has myofascial insertions from the posterior tibialis muscle (which is part of the deep front line) and joins the abductor hallucis as a conjoined tendon.

This complex myofascially integration of the foot with the rest of the body is all is the name of LOCOMOTION!

So what do the sesamoids have to do with this?

Well there is what’s referred to as sesamoid position.   Sesamoid position is the transverse plane position of the sesamoids in relation to the midline of the first metatarsal.

In the case of bunions or deviation of the great toe what starts to happen is the sesamoid position shifts.   When the sesamoids shift they begin to provide a mechanical advantage to the adductor hallucis muscle in the transverse plane (which is part of the pathomechanics behind bunion formation).

How does this influence short foot?

By using kinesiology tape you can assist in abduction of the hallux while stimulating the superficial proprioceptors.   http://www.rocktape.com

Bunion Bootie is one of my favorite bunion correction devices that are slim, sleek and can be used during barefoot exercises or even in shoes.   This small device is more of a sock that a device.     http://www.bunionbootie.com

Remember that even though the client may not feel the engagement of the abductor hallucis be patient.   The more foot intrinsic strengthening is integrated into the client programming the more the motor neuron activation will follow.